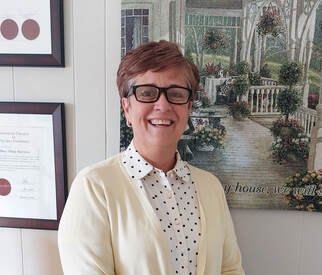 The Reverend Diane Knowles
Diane is a Maritimer. She was born and raised on the Avalon Peninsula in Newfoundland. After high school, she left the island to study at Mount Allison University in New Brunswick where she earned a Bachelor of Arts degree in English and Psychology and was on the Dean’s List.  Returning to St. John’s, she became an on-air host for a local radio station for six years. She was “discovered” by CBC  because she then became a writer, broadcaster and news reporter for CBC Radio in St. John’s for another six years.  It was during this period that Diane began to realize that she wanted to provide more comfort and support to people in crisis, whom she interviewed, than her job as a journalist enabled. This was the beginning of the stirrings of a call to ministry.

During this period too Diane met and married Marc who is an Air Canada pilot. They had two children, Joshua and Rebecca who are now in their twenties, completing their studies and starting their careers, although Joshua’s plans of becoming a pilot have been sidelined by the disappearance of pilot’s jobs due to COVID-19. Diane calls her family her three biggest blessings in life.

When she was 40, and the family was living in Ontario, Diane responded to the nudging of the Spirit, and began theological studies at Emmanuel College, the University of Toronto. She was the recipient of the Emmanuel College Philosophy Award of Distinction along with her Master of Divinity degree in 2007. She was ordained and settled by Toronto Conference at Bond Head United Church and had a fulfilling and flourishing ministry there for 13 years.

Marc was raised in Bracebridge and feels he is coming home with their move to Muskoka. Marc has a deep bass voice and loves to sing.

One of the gifts Diane brings is nurturing us both spiritually and psychologically to be the best we can be, and working alongside Karen, our Pastoral Care Coordinator, she will help those needing to find healing and peace. 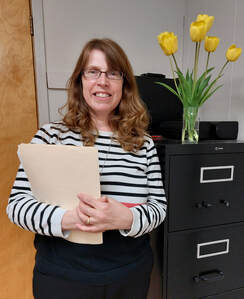 Our Church Administrator, Suzy Simson
Suzy has been back in Canada and living in the Huntsville area with her husband and children since the year 2000.   She grew up in East Challow near Oxford, England and was only 17 years old when she met her future husband, Ray, in the pub where she worked.  Ray grew up on Three Mile Lake near Windermere, and was in England visiting family at the time. Suzy and Ray moved to Canada together for 3 years, and then back to England for 10 years where they were married. Their first daughter, Molly, was born in England.  When Molly was only 18 months old they moved back to Canada, and their second daughter Megan was born here in 2001.

Suzy has honed her secretarial and administrative skills over the years.  She has been a stay-at-home Mom with her two girls, as well as helping to run her husband's drywall business "The Art of Drywall", which has been operating since 2004.

​Suzy started her new job as Trinity United Church's Church Administrator in the spring of 2015.  She brings to us a wealth of organizational and administrative skills.  Some of her responsibilities include preparing the bulletin each week for the Sunday Service, booking and organizing all the rentals for the church, including regular users of our facilities.  Suzy handles all inquiries coming into the church office. Her enthusiasm and pleasant personality is appreciated by all who come through Trinity’s doors. 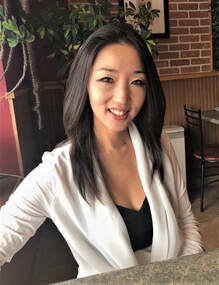 Kyung-A strives to create an atmosphere of celebration and reverence to God through music at all services. Born in South Korea, her passion for classical music has allowed her to study and perform at internationally renowned schools such as Franz Schubert Institute in Austria, Mozarteum in Salzburg, Centre for Opera Studies in Italy, and she is a frequent participant at the Banff Centre for music.

Her curiosity and wide-ranging interests have taken her in many different directions, establishing versatile reputation. She attended the Faculty of Music at The King’s University where she received her Bachelor of Music Degree, as well as a diploma in Church Music and many individual awards of excellence. Kyung-A continued her studies at the University of Alberta and earned her Masters of Music Degree and began her Doctor of Musical Arts.

Over the years, Kyung-A has shared her many musical talents with The Edmonton First Presbyterian Church as well as playing for a number of chamber choirs in that area, including the Cantillon Primary Choir. She was also the vocal coach for the Edmonton Women’s Choir. Kyung-A was invited to join the Faculty of Music at the University of Alberta where she filled the position of Resident Artist and Teaching Assistant for a wide variety of vocal and instrumental classes for 2 years. Later she returned to The King’s University where she was an applied music professor, resident artist, directed studies professor and vocal coach for 3 years.

We are excited that Kyung-A finally returned to Huntsville and has made her home here. She is engaged to Parres Allen and they are busy planning the wedding which has been postponed twice due to COVID-19. Kyung-A has brought Trinity her in-depth knowledge of modern Sacred music as well as more traditional and classical music. She is always happy to coach our COVID singers to help enhance their own musical skills. Thanks so much Kyung-A and welcome to Trinity! 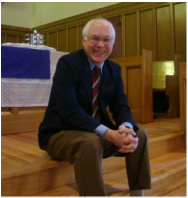 Minister Emeritus, The Reverend John McTavish
Do you remember what you were doing on July 1, 1967? John McTavish certainly does. It was the first day of his life as a United Church minister in the community of Port Loring, a small village west of Trout Creek. John 'hit the heights' that day, sharing the back seat of a convertible with the late Stan Darling, long time member of parliament for Parry Sound - Muskoka in that town's Centennial celebration parade. As John so irreverently says, his career was all down hill from there! And what a career it was.

Following the path of most young ministers, John and Marion and their family moved to Richmond Hill for five years before arriving in Bracebridge in 1975. John and Marion have always had a love of theatre and together they have produced and directed dozens of plays and musicals over the years. It was in Bracebridge that John made mark as a person who wouldn't bow to pressure when their production of Godspell was picketed by a group of Christian fundamentalists. He says he has taken a few hits to the jaw but has never been knocked out. In fact, John went on to publish his own director's manual for Godspell which has been used by a number of other productions.

After several years in Bracebridge the McTavish family was off to Kitchener before arriving in Huntsville in 1988 and here John really blossomed as a minister and in his outreach to the community. For that is what John's efforts as director amounted to. He pulled people in from the entire community for an experience many would never forget. One of John's favourite playwrights is Alan Ayckburn and he and Marion have produced the Norman Conquests twice in their favourite format, Theatre in the Round. John even had the chance to play Norman himself in one of these productions. Musicals have also played a large role in John's directing career. Anne of Green Gables, Annie, Lil' Abner and Godspell have all graced the small stage in Trinity Hall.

​John is also an accomplished playwright and the congregation at Trinity has been enriched by his stirring chancel plays, especially the one honouring Martin Luther King. For a number of years John had a regular column in the Weekender and has been a book reviewer for the Observer and the Presbyterian Record. Thankfully, although John has been retired for a few years, he is still contributing to the richness of life in Huntsville and especially to the enrichment of the congregation of Trinity. Late in 2009 John was honoured to be designated Minister Emeritus of Trinity United Church, an honour well deserved. Well done, John! Not such a downhill slide after all.​ 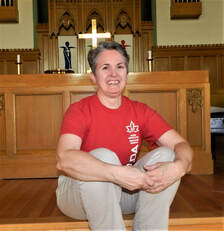 Our Custodian, Judy Hall
Judy arrived in Huntsville thirty years ago to set up practice as a Registered Massage Therapist. In 2006, she became involved with the Scouting organization sponsored by Trinity United.  Judy started attending services so she could figure out how the Scouts could interact with the church, especially in Remembrance Day services and found a connection with Rev. Derek Shelly and his history in Scouting.  She has never left.

Judy grew up in the United Church and is the granddaughter of a United Church minister.  As a teen, she was confirmed at the church her grandfather had ministered at and also cleaned the church there. She attended Seneca College to study in the Recreation Facilities Management program.

Over the years Judy has contributed to Trinity by serving on the Fellowship and Membership, and the former Property and Finance committees. All this experience gives Judy the knowledge of what is required to keep up the facility and make it work for the users.

In Judy’s spare time, she cuts grass at Deerhurst Highlands Golf Course, golfs, and enjoys all the outdoor activities that Muskoka has to offer.