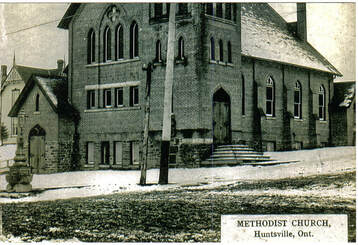 From ‘A Brief History of Trinity United Church, Huntsville’ by John Laycock, “In the early days of Huntsville it was almost wholly due to the efforts of Capt. George Hunt that religious services were started and continued...It was at that time non-denominational and non-sectarian in character...

On June 6, 1869 Capt. Hunt’s first cabin was completed and occupied by him, and on that date, he opened the first Sabbath School, taught by himself and continued to hold services for years in and around Huntsville at various points...”
​
October 17, 1869 – first regular service held in Huntsville in Hunt’s Cabin by Rev. R.N. Hill.

The Huntsville Methodist Church opened its doors for the first Sunday service in October 1897. In 1925 after Church Union, the name Trinity United was adopted. 100 years later our church continues as a focal point of the Huntsville community.

We are a vibrant congregation with new folks joining every year.

Our church building includes several meeting rooms as well as “Trinity Hall” which can be used for banquets or as a gymnasium. These facilities are used by church groups such as UCW, Souper Sandwich, and Study/discussion groups. The community also makes good use of our facilities with groups such as Beavers, Cubs and Scouts, AA, Alanon, NA, The Table Soup Kitchen, volleyball, badminton, Kumon, school bands, Huntsville Festival of the Arts, Art shows and various theatre groups.

Though our building has been here for over one hundred years, we have constantly worked to improve our facility to make it safe and pleasant to be within. The Sanctuary, offices, washrooms, Hearth Room and Trinity Hall are all wheelchair accessible.

We welcome new members of all ages. Come and see for yourself!